Most Americans, year after year, continue to think that the country is on the wrong track. The older you are (i.e, the more experienced you are, and the more of history you’ve seen), the more likely you are to think everything is falling apart. And it’s not just in America: worldwide, people tend to think things are getting worse. And it’s undeniable that the world is facing horrible problems: climate change, pollution, terrorism, income inequality, racism, sexism, etc., etc., etc.

Almost all of us have tragic answers to those questions. The things we love in our lives always end; the patterns we love endlessly unravel.

In nature, things unravel, too. But there, something else is always raveling up to take its place. Trees die, but their tall standing snags — monuments to themselves — are colonized by armies of insects, fungi, and other critters, which in turn become feasts for woodpeckers and other animals. And when the snags finally fall, they become nurse logs for the next generation of trees, nourishing a richer, more diverse forest.

A tree’s death is a catastrophe, but it’s also what Tolkien called a eucatastrophe: a sort of deus ex machina, except that instead of a god swooping in from on high at the last minute to save everything, it’s a sudden unexpected change in fortune that’s consistent with the established framework of the milieu. It’s a miraculous redemption that arises inevitably from the world itself.

Oftentimes, a eucatastrophe is the result of the efforts of many, many individuals (humans, bugs, plants… doesn’t matter), each working for their own benefit or the benefit of their local community. Individually, each effort is barely noticeable, but when they’re added up, profound changes take place. Since these small efforts are self-directed, it can be extremely difficult to see what the final aggregate result will be, and whether it will, in the end, be good or bad.

Such is oft the course of deeds that move the wheels of the world: small hands do them because they must, while the eyes of the great are elsewhere. – Elrond, in the Fellowship of the Ring

So perhaps things look like they’re unraveling simply because we don’t have the complete picture. We as a species are young, and our vision is limited. We sometimes glimpse things that might happen, but for the most part, we only see the present and the past. It’s no wonder that most of what we see seems to be dying or dead.

The core of the problem, really, is that we can so rarely see patterns before they emerge. And so the world seems to be falling into disorder, and our lives seem to be full of endings, with precious few new beginnings.

It is an illusion, though. A new order is rising up, but we can’t see it. This is why eucatastrophes are surprising.

Oftentimes we can see the re-raveling only in hindsight. Human history is littered with dire disasters and intractable problems: the ‘population bomb’, the end of oil, war, the nuclear holocaust, monarchy, illiteracy, slavery… But it’s an undeniable fact that most of these problems have gotten better over the last few hundred years. Not solved — not by a long shot; even one person enslaved is a terrible tragedy. But better. Most problems, like human rights violations and non-renewable energy, have been improved through long years of thankless toil. Many others, like slavery in the US, cost hundreds of thousands of lives. Some, like the falling rates of crime and warfare worldwide, have just been slowly eroding away, though no one really knows why. And a few, like the hegemonic Soviet Union, have ended in a completely unexpected eucatastrophe.

This happens in one’s own life as well. I’ve left behind friends in six different cities, lost three jobs, lost a marriage… Many of these changes left me wondering whether everything I’d worked and struggled for was gone forever. But of course, I made friends in the seventh city, scored that fourth job, and found a true soul partner. After 40+ years of life I’m finally starting to glimpse the larger tapestry sometimes. There are still problems and tragedies I struggle with, but someday — sooner, perhaps, than I can see — they will pass, too.

How can we get better at seeing patterns before they’re fully formed?

First, practice. Look for the raveling. Too often we focus only on what is going wrong, or what we fear will go wrong. This is instinctive. As embodied beings, it’s natural to be wary, to watch for danger. But take time to look for what is going right, or what might go right, and focus on that as well. The old saying is to hope for the best and prepare for the worst; and both parts of that are important.

Also, study history. Look at how eucatastrophes happened. Most people were surprised when the Soviet Union collapsed, when monarchies ended, and so on — but the writing was on the wall for decades. What writing is on the wall now?

Trust your gut. Your conscious mind has access to only a small part of your complete consciousness. Your subconscious is always looking for patterns, and usually sees the big changes coming. Meditation, and talking to guides, can help.

And finally, have some faith. One of the things I struggle with personally, as a Druid, is what Alison calls the ‘Problem of Justice’. Just as Christians wonder why God permits evil in the world, we who follow a nature-based spirituality wonder what is natural and what is unnatural, what is right and wrong, what is evil and what is good. When you see an oil spill or a huge parking lot and you feel a visceral revulsion or sorrow, your body is telling you that it is unnatural, wrong, evil — especially when compared with a forest or pristine river. But obviously humans are part of the natural world, and what we do is natural; so in a sense, an oil spill or parking lot is natural too. So why are we always tearing things down, causing mass extinctions, and fouling the waters? How can these things be “natural”, how can they be “good”?

And it’s not just humanity. When beavers flood a forest, felling and drowning dozens of trees, or when wolves disembowel an encroaching coyote and defecate around its body as a warning to the others, we have the same problem:

Many earth-centered spiritualities look to the relationships, patterns and laws of nature for insight into the ways we might live a just and ethical life — yet, within nature are myriad examples of suffering, destruction, violence, injustice, even cruelty and maliciousness… How should we respond to them? — Alison Leigh Lilly

The resolution of these paradoxes (both the Druid paradox and the Christian one) may, in part, lie in our limited human understanding. Maybe we just can’t yet see how the evils of the world will be woven into the larger pattern of beauty. In nature, always, there is a subtle, organic order at work. Problems turn out to be blessings; tragedies plant the seeds of triumphs. Even in truly awful situations — such as a forest fire — there is a hidden raveling. Underbrush is cleared out, soil is renewed, seeds are germinated, diversity is increased, and diseases are cleared away. Forests periodically burn as naturally as the cycle of the seasons. Maybe what we see today as injustice is part of a great invisible cycle.

It can be hard to have faith, to believe in rebirth, when all you can see is death. But something wonderful is being born, right now. Study, sit in silence, and wait, and you will see it. 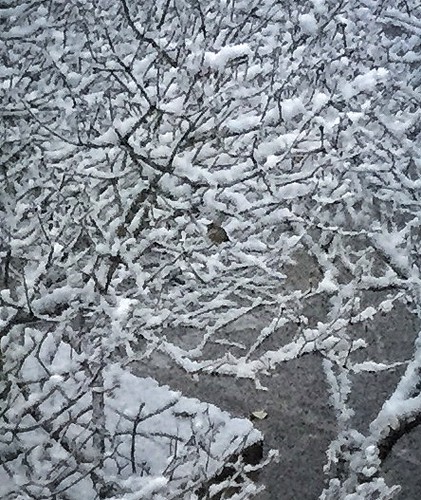