Ali and I just got back from the Wild Goose festival, a gathering of “emergent” Christians — those who, broadly speaking, are seeking a way to reconcile Biblical authority and church teachings with issues of justice, technological and social change, and the place of Christianity as one religion among many. It was fascinating to spend time among so many Christians — none of whom proselytized at us, lectured us, or pitied our poor damned souls, but were welcoming, open-minded, and, in many cases, brilliant and inspiring.

All of which I’ll write a lot more about later. For now I want to share a quick story that moved me, and think a bit about the words wild and goose. 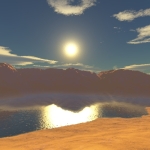 I attended a Q & A session with Richard Twiss, a moving First Nations speaker, educator, and author. He shared his own personal struggle to reconcile his personal experiences with Jesus — as one who saved him from drugs and alcohol and gave meaning to his life — with his deep call to the ancient traditions of his people, the Lakota. During the session, a woman stood up and told her own story of how her life was almost claimed by drugs, and how her Christian faith was revived, and saved her; and how, as she struggled with detoxification, three wild geese came and settled outside the door of her house for a week. When she heard the name of the festival, she knew she had to come.

Among the Catholics, the Holy Spirit is often represented by a dove; but the Celtic Christians preferred to think of it like a “wild goose”. Why? For them, the Holy Spirit was not a quiet, demure bird, but a loud one, and uncontrollable one, which arrives unexpectedly and wakes the neighbors. It does not submit to human authority. When this spirit calls, you have no choice but to listen, and your life may never be the same. I think many pagans can relate to this aspect of the spiritual world. As Ali writes:

I think there is power in the metaphor of the “Wild Goose” — An Geadh-Glas — the name in Celtic Christianity for the Holy Spirit. The Holy Spirit is, after all, that Person of the Trinity which is the indwelling Spirit in all things, the immanence of the divine in the world itself. She is the balance and compliment to the transcendent God-the-Father. She is the fire of inspiration, the creative power of eros, the source and sustainer of community, the untamable wildness of hope. When we go on a “wild goose chase,” we can feel that we’re going in circles, spiraling silly around that which is elusive and mysterious.

The word goose goes back to Proto Indo European ghans, a word which was probably meant to sound a bit like the bird’s honking. Ghans became gans in Proto Germanic, gos in Old English, and goose in Middle English. Spiritually the word indicates energy contained and cultivated, flowing, moving, and subconscious, released with brilliance, sunlight, increase. The goose, then, is a bird of hidden treasures — of spirit in unseen motion, like water flowing underground, until it bursts forth in a spring. For the goose, of course, is the bird that lays the golden eggs.

Wild also comes from Proto Indo European: ghwelt meant “untamed” or “natural”, and was related to ghwer, a wild animal (the ancestor of fierce). Ghwelt became wilthijaz “the untamed ones” in Proto Germanic, wilde in Old English, and wild in Middle English. Wild echoes senses of willfulness, creative choice, void-filling light, and doorways of decision. It is not a word of chaos, or rule-breaking for its own sake. That which is wild follows its own will, making its own meaning, sailing on its own winds.