This week we’re in Charleston, South Carolina, visiting the Angel Oak. It’s considerably sunnier and wetter here than it is back in Pittsburgh: the earth is sandier, the blue skies paler, and the waters warmer. In the morning we went out jogging past the stately homes, the gardens lush with semitropical bushes, huge magnolias, and towering pines. In many places the yards showed the ongoing struggle of the suburbanite to grow grass everywhere, everywhere in America, even in places that would much rather be, say, a sandy beach, or a peat bog. As we ran, we ducked under the hanging Spanish moss, one of my favorite plants of the deep South. 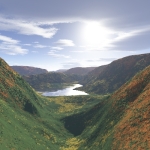 Spanish moss is not moss at all, really, but a kind of bromeliad, related to the pineapple, and native only to the Americas. Like many bromeliads, it grows in the air, attached to other plants (or poles or telephone wires), and thrives in areas of high humidity. The island of Barbados (from Portuguese “bearded”) was named after the Spanish moss growing there.

The Proto Indo European root meu meant both “moist” and “marsh”; it is the ancestor of Latin mucus (eww) and Proto Germanic musan, meaning “marsh,” “bog,” “mire,” and a plant that often grows there: “moss.” Musan became meos in Old English and moss in modern English. Meanwhile, musan became myrr in Old Norse, which was borrowed into English as mire. These words both carry the spiritual notion if manifestation, creation, in recognition of the tremendous life-fostering power of those areas where land and water mix in equal parts. Moss also has earthiness and growth, increase; while mire has strong motion, power, movement, and suggests an almost malevolent agency of entrapment.