While vacationing in Acadia, Maine, I recently found myself strongly drawn to carvings and pictures of bears in the shops and on signs and so forth. And once, while hiking, I thought I heard a bear (they have a distinctive shuffle). I meditated on this, and began to remember the many times in my life when I had dreamed of bears, or encountered them while hiking. And when I did a visualization meditation in which I invited the bear to meet with me, it helped tremendously to resolve some issues with protection and financial security.

The Bear is known the world over as a symbol of protection, self-sufficiency, rebirth, the sun, and the abundance of the earth. During the winter, the mother bear retreats into hibernation, and at that time she gives birth to her cubs; little wonder that she is associated with the sun. She makes her dwelling in the Earth, and therefore has a special knowledge and intimacy with it. Tales the world over speak of bears turning into humans and vice versa: the whole Korean nation, for example, is supposed to have descended from a she-bear who made herself human by eating 21 cloves of garlic and retreating into a cave for a month. The bear is associated with protection not just because of her size and power, but because of her well-known fierceness when guarding her children — a necessary fierceness, because a father bear will sometimes kill his own cubs if their mother does not protect them.

I created this meditation based on my own recent experiences. In it, I guide you through a visualization of a landscape of forested mountains, rushing streams, and brilliant starry nights: the natural home of the bear.

The meditation is 14 minutes long and 13 MB. Like all my meditations, it is available for a donation of any amount. (There is a suggested donation of $10, but you can easily change it to whatever figure you feel is appropriate.) Enjoy!

[Note: the meditation is currently unavailable.]

(And while you’re at it, don’t forget the many other downloadable meditations available on the Downloads and Offerings page.) 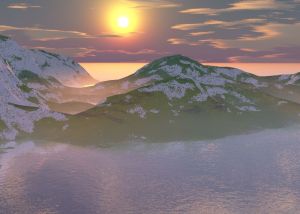