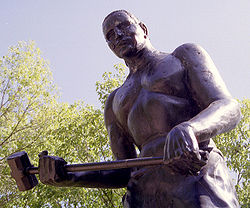 In Science is a Hero, there is some problem or other — an asteroid is going to hit the Earth, the Galactic Empire is falling, there’s a Plague IN SPACE!! — and the heroic characters unabashedly use Science to deflect the asteroid, restore Galactic civilization, cure the plague, and, not infrequently, have sex in zero-G.  Ain’t Science great?

In Science is a Villain, Science itself is the problem.  Science unleashes dinosaurs, Frankenstein monsters, unstoppable robot armies, murderous computers, super-soldiers, atomic horror, etc., and humanity has to fight them off.  Sometimes humanity barely wins, at great cost.  Other times we lose.  Science makes a nasty Villain.  Moral:  Science sure can be dangerous, kids!

These two kinds of stories echo our ambivalent attitude towards technology, of course.  Real life science has cured countless social ills and brought previously-unimaginable wonders, but it has also caused social upheaval and brought previously-unimaginable horrors. It’s no surprise that the stories that are most famous, the ones that keep us up at night, are the villain ones:  HAL 9000, velociraptors, Terminator, the Matrix…  The villains, the nightmares,  echo most closely the demons we’re wrestling.

John Henry isn’t usually considered a science fiction story, but in fact it’s one of the first. It’s a classic Science as Villain plot:  the newfangled steam-driven hammer appears on the scene, threatening the jobs and livelihoods of the steel-driving men.  Actually, it threatens not only their livelihoods, but their whole way of life.  When it’s recalled that, just a few years before, most of those steel-driving men had been slaves, you can sense the undercurrent:  the Rich White Fathers are going to replace their black slaves with machines, rather than pay them an honest wage and recognize their common humanity.

John Henry won’t stand for it:  he’s going to beat that steam-driven hammer.  And he does!  But, of course, his heart bursts in the effort.  The drill is broken, too, but it can be rebuilt.  John Henry can’t be.

What’s the moral here?  Perhaps it’s the same simple moral you find in a lot of Science is a Villain stories:  it’s a cautionary tale.  Watch out, folks!  Turn your back on Science, turn your back on Knowledge, Meddle Not in Wot Man Was Not Meant to Know, etc.

But John Henry puts some fascinating twists on this simple Luddite message.

The Measure of a Man

First, the most popular version of the ballad of John Henry does not spend most of its verses describing his strength, brawn, skill, etc.  Nor does it spend most of its time describing the great contest between man and machine.  Instead it sings about John Henry’s dreams, and the promises he makes to his wife and son.  He’s going to buy her a nice house, and kiss her cheeks, and put gloves on her hands like a rich woman.  He takes his son up — the child so small, and John Henry so tall — and tells him his dreams for him.  John Henry may be a steel-driving man, but wielding a nine-pound hammer is only a small part of that.

Second, John Henry beats the machine, but dies doing it.

And the Winner Is…

Is it futile to compete against the machine?  Is there no way to engage Science and win?  Certainly that’s the theme of lots of Science is a Villain stories, and it’s something we see again and again in real life.  It may well be futile to fight nuclear power — for every nation that outlaws it (like New Zealand), there are a dozen actively struggling to develop it.  It may be futile to fight genetically modified foods — they’re not allowed in Europe, but the rest of the world’s frankenseeds are multiplying without limit.  It may be futile to fight climate change — the nations and industries that pollute the most are the very ones most resistant to reducing emissions.

Because it’s a fact that whenever Science is stoppered up somewhere, it finds some other way out.  The gun is a perfect example.  Explosives-based weaponry was first developed in China, but the potential of the new technology horrified the Emperors so much that they outlawed any further experimentation with it.  When the technology reached Europe a few generations later, some of the nations there tried to outlaw the technology, too; but since Europe was comprised of a dozen nascent nation-states in cutthroat competition, any country that didn’t develop gunpowder-based weaponry was quickly conquered by one that did.

So is it futile to compete against the Machine?  Well, yes and no.  What are you racing for?  What’s your goal?

But if the goal is to live a good and worthy life, to provide for the ones you love, to care for them and inspire them with the way you live and die, then the struggle is never futile — in fact, it’s essential.  No matter the outcome.

John Henry was a steel-driving man; this was a conscious choice he made, a self-defining choice.  Being able to define himself was an essential part of his humanity, something he had been denied as a slave.  Part of being a steel-driving man was wielding that nine-pound hammer, but it was also being a good provider, a husband and father, someone who could give a good life to the ones he loved.  It was being part of a family, part of a community, and making worthy and good choices for the benefit of all.

And no machine could take away those choices, could undo that self-definition.  No machine could keep him from being a steel-driving man.  So when John Henry stood up and challenged the steam hammer, in that moment, he won:  he reaffirmed his own will, his own self, and his own humanity.  The Machine can never take that from us, unless we let it.

John Henry died, and so did all the other steel-driving men, eventually.  But every one of us who stands up to the inevitability of mechanization, who reaffirms our personal choices and our personal humanity in the face of technological horror, is walking in his footsteps.

3 thoughts on “Man vs. Machine: John Henry, Science Fiction, and the March of Progress”